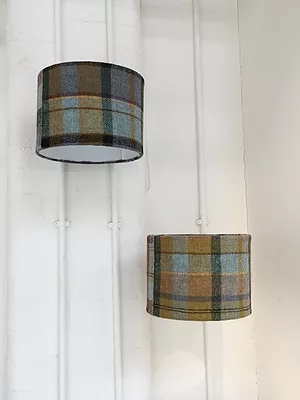 So, the show is up, and I can try to work out what to do with my life now I don’t have a college deadline looming! The Summer Show has its preview this coming Friday and then is open to the public Saturday 10th to Thursday 15th. Full details are here; although the HNC in Textiles is not listed, we are taking part, honest!
Anyway, I thought you might like to see some of the things that I have made. You might want to get a cuppa; this is going to be a long post! If you have read the blog, you know that the work is based on two parts of the West Windows of Manchester Cathedral (both from the St Mary’s Window). I wanted to push my experience of using a block structure in double weave to generate irregular blocks of colour and contrasting patterns, and although I have only scratched the surface of what could be possible with this combination of warp stripes and blocks in double weave, I think I have achieved that. It’s building on from the work I completed in Project 4, but being able to use all 24 of the Magic Dobby’s shafts has really pushed this on.
First up are some lampshades: 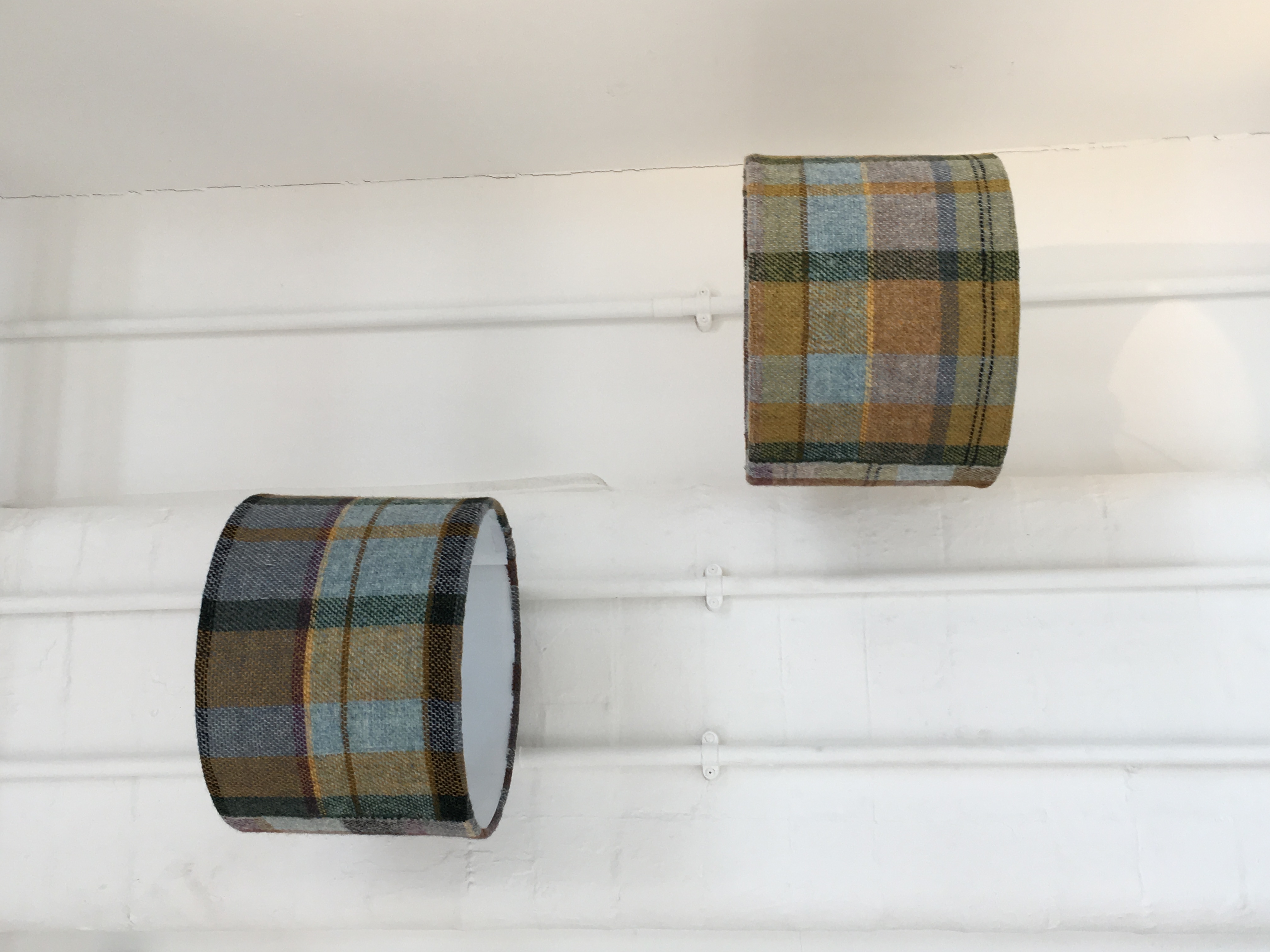 The neat thing about weaving two layers of fabric at once is that if you are consistent in the way you deal with your shuttle when it comes out at either side of the loom, you can “stitch” the two layers of fabric together at one selvedge and leave it open at the other. When you take it off the loom you can open it out and voilà! You have a single layer of cloth, but it’s double the width, this is what I did for the two drum lampshades handing up. I deliberately staggered the blocks of colour in each layer, so it tied in a little more with the irregular double cloth blocks. I like the visual of the thin lines of different coloured weave that mimic some of the marks you see in the individual panes of glass, but it is a challenge to keep them completely straight when constructing the lampshades. Also, the lampshades are fairly easy to assemble but are inifinitely easier with an extra pair of hands and when using anything other than a handwoven fabric that has an open enough weave for fraying to occur. Experience helps though; by the fifth assembly I’d worked out how to improve the finish. 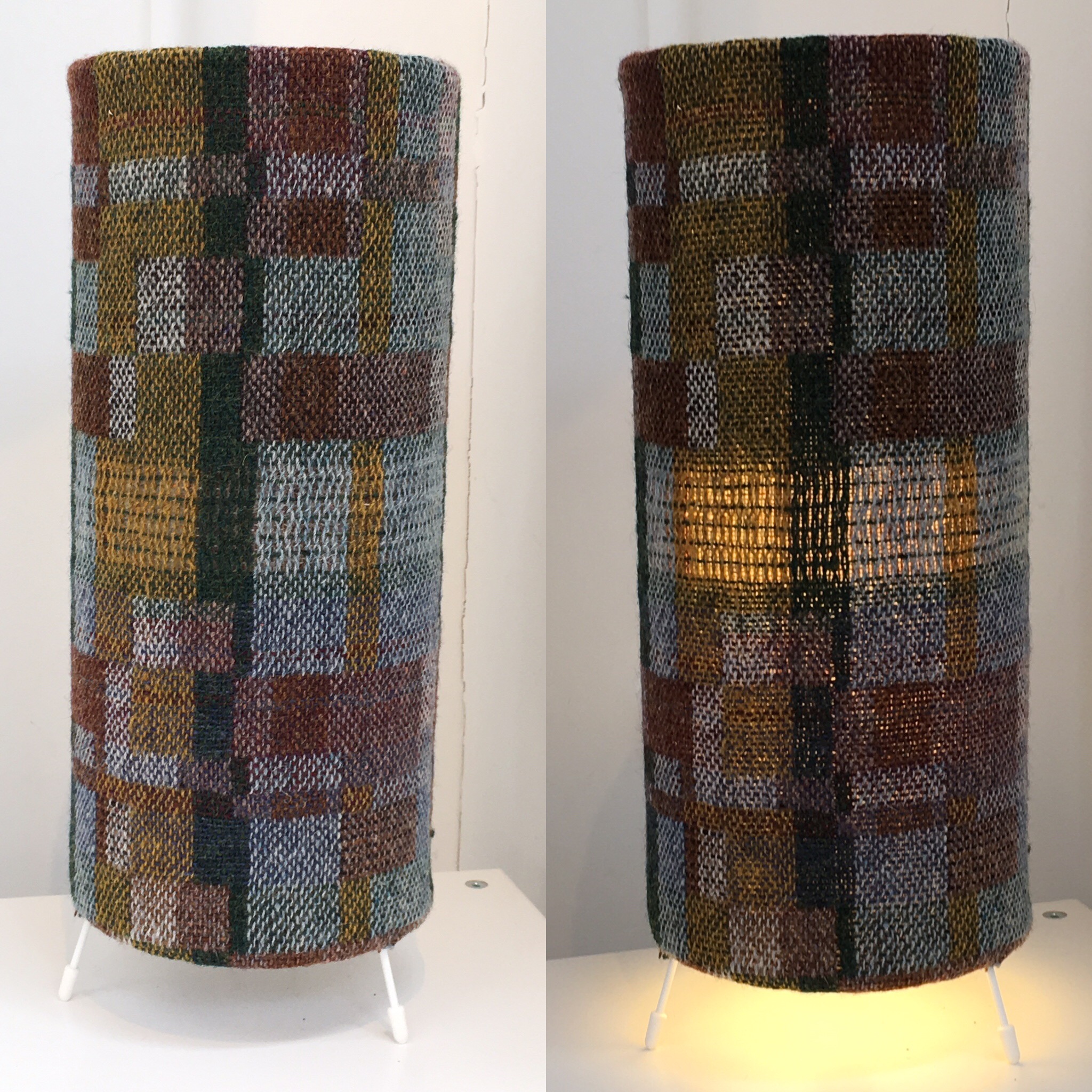 The table lamp is double cloth with a band of Leno in the middle to provide a thinner area to allow light to shine through. I had originally wanted to use coloured monofilament for this area, but I didn’t. I used a thinner silk with cotton nepps behind the Leno and it allows the light to glow. I really like the way the block combinations I have used have broken up the strong green warp stripe, too.
I also made a throw, which I love and you have seen already, albeit in black and white: 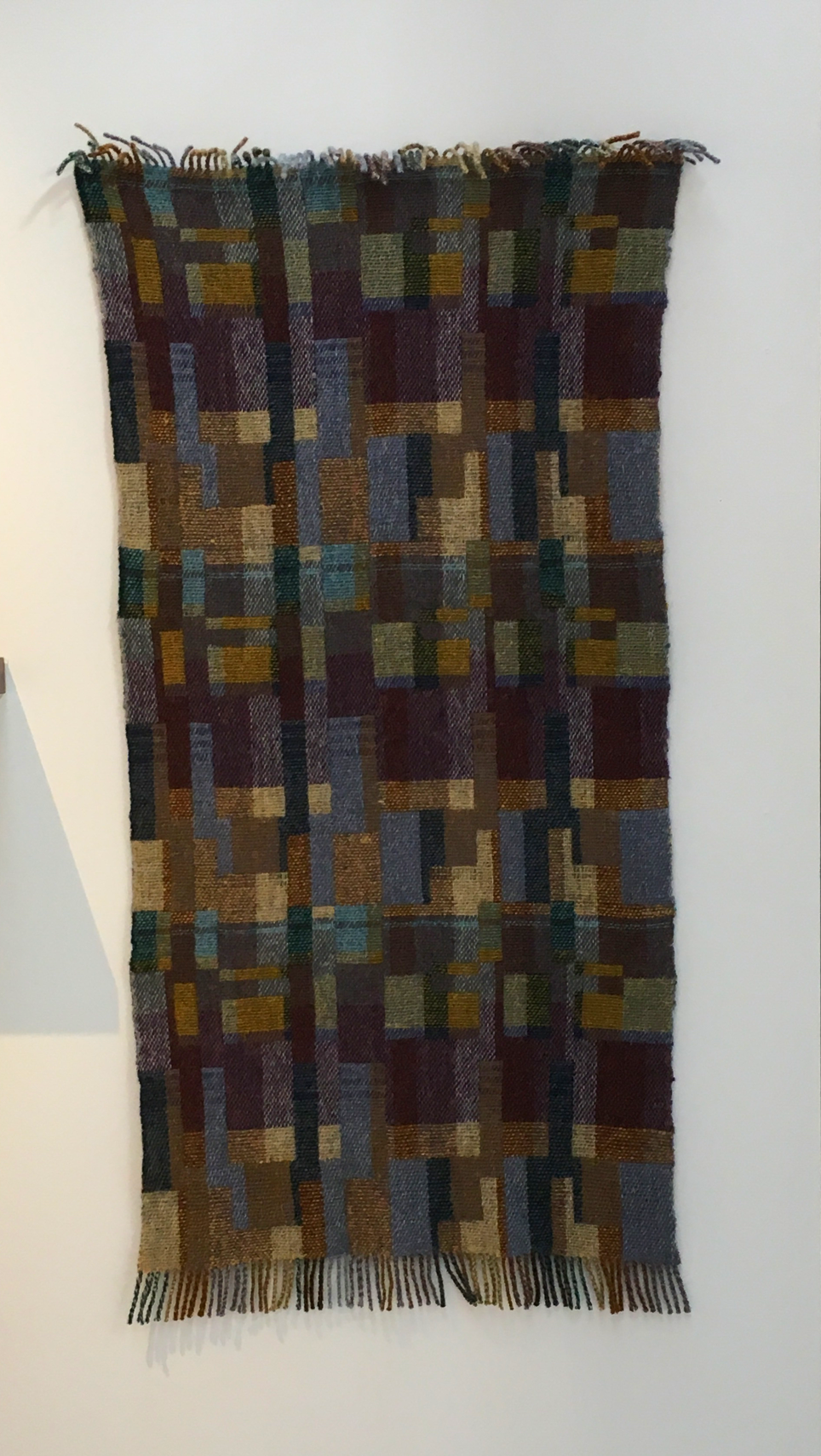 Here it is, up for the Summer Show, although it’s not very well lit as we need to move a spotlight to shine onto it. The weft yarn is Shetland Spindrift by Jamieson’s of Shetland, which is thicker than the weaving yarn I am using as warp (also fromJamieson’s of Shetland). The sett is 4 ends per cm or 10 ends per inch and the throw has been brushed with a twig bristled brush to raise a fuzz over the surface of the fabric. It was interesting to design, as I’ve never had to consider colour when planning a design repeat before – mainly it’s been a twill based pattern using a single colour of yarn so all I have to do is make sure the last pick of the pattern will feed smoothly into the first. Here I had to consider how I wanted the colours to flow too, and whether I wanted a stark change when I restarted the pattern or a more graduated one.
Next up are the cushions: 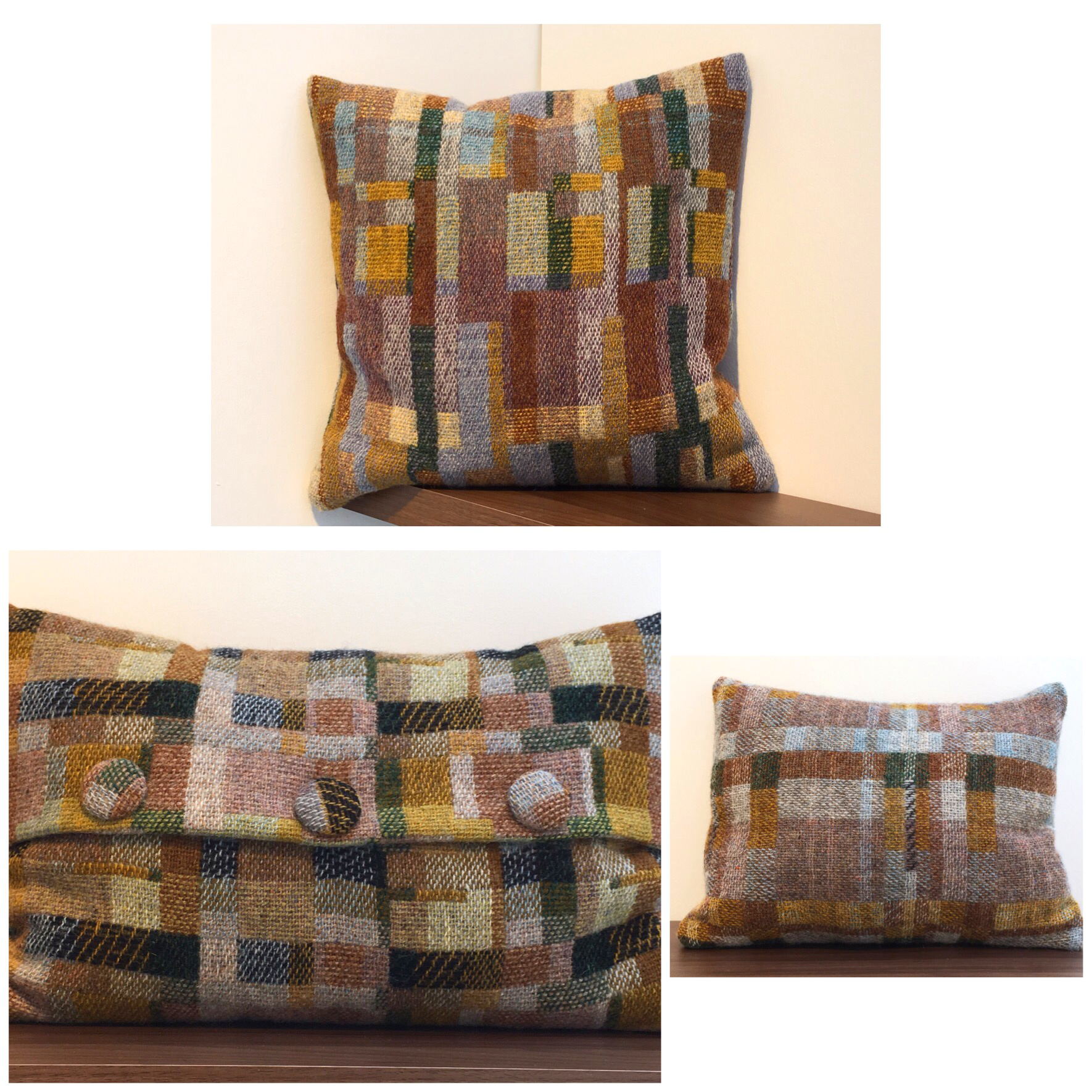 The large square cushion (top) is drawn like the throw in part from the final piece of the artwork I featured in this post . It is woven with exactly the same pattern and weft yarns as the throw but eith narrower sett (5 ends per cm, 12.5 end per inch). This has changed the appearance of the fabric in more ways than just narrowing the width of the blocks. I didn’t beat the weft picks as closely together either, so even though it’s thinner, the warp threads show more than in the throw. The envelop cushion is a particular favourite, in part for the self-covered buttons. I also like the subtle differences you get when you repeat a pattern and colour sequence but substitute just one colour in it as I have done here. (Subtle but it makes it. Two of the repeats use dove grey, two substitute old gold.). The final cushion is a small rectangular cushion foldedwidth ways so the warp runs left to right as you look at it in the photo. I deliberately focused on combining long vertical blocks (actually running horizontally here) with very thin horizontal blocks with small areas of black twill (running vertically here), to get a very different feel to the other two cushions, where the blocks are very “choppy”. This also uses the same weaving yarn as the weft, so the fabric has a different feel.
Finally, what I think is my favourite piece: 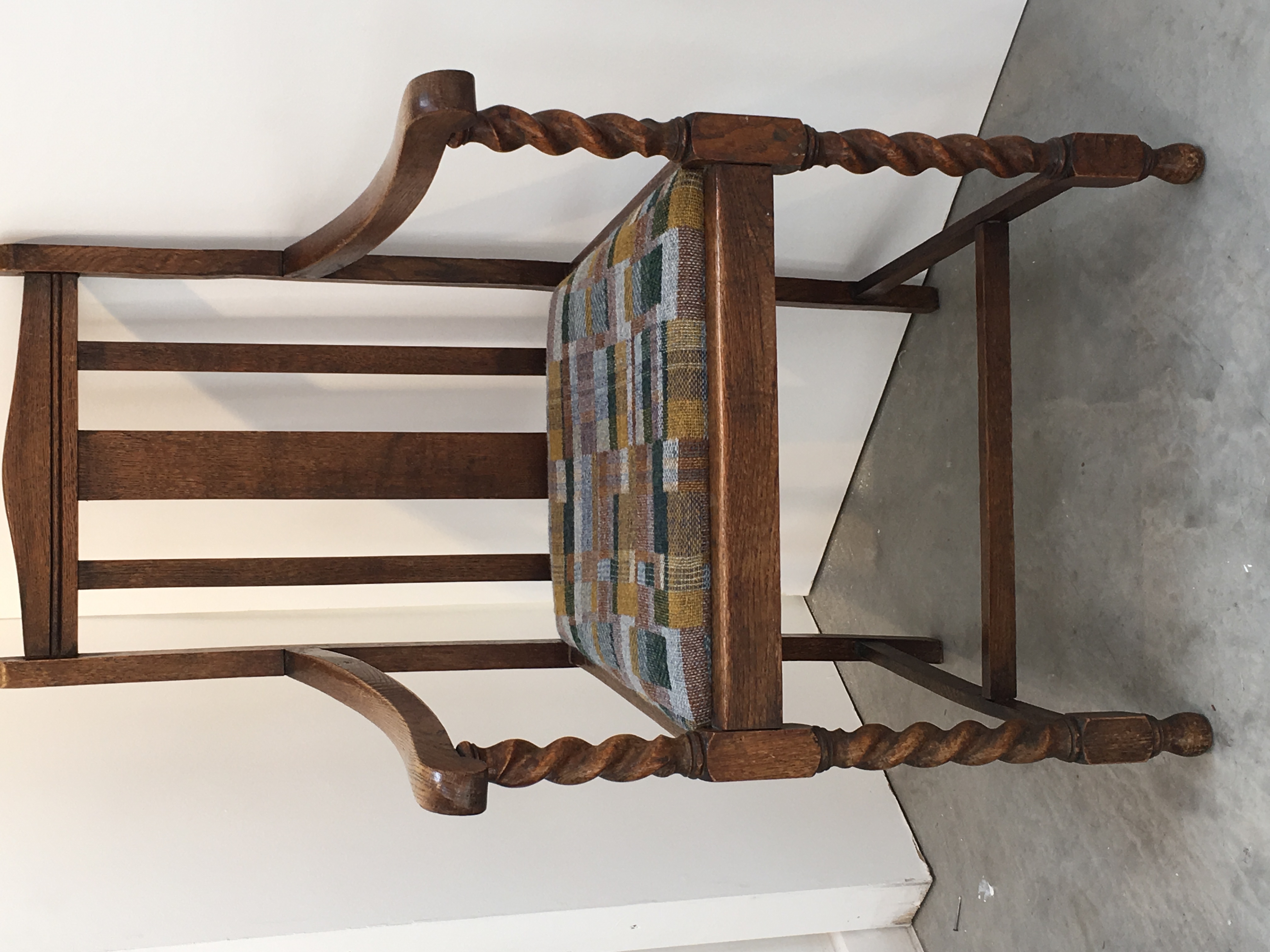 I was originally going to make a slip cover for a cube footstool from IKEA, but I realised I wouldn’t have the time to weave all I needed to weave for it. I decided instead to weave a piece big enough for the seat pad in Victorian oak chair I’d found in a charity shop, but I was concerned about whether it would work or not. I had based it on a sample I’ve woven that used sky blue, blue lovat and Neptune (a mid blue) weft yarns, with just a little bit of yellow ochre. As I designed this fabric, I ended up increasing the proportion of yellow ochre in it (partly because I didn’t want to lose my favourite blue parts in any hems or seam allowances in the skip cover and partly to ease the transition in the pattern repeat). When I took the fabric off the loom I just wasn’t sure about it – the increase in yellow ochre just messed with the balance, or so I thought.
Then I covered the seat pad and, after I’d lavished some love and some dark oak stained beeswax on the chair which was showing signs of having been rescued, I popped it back in. 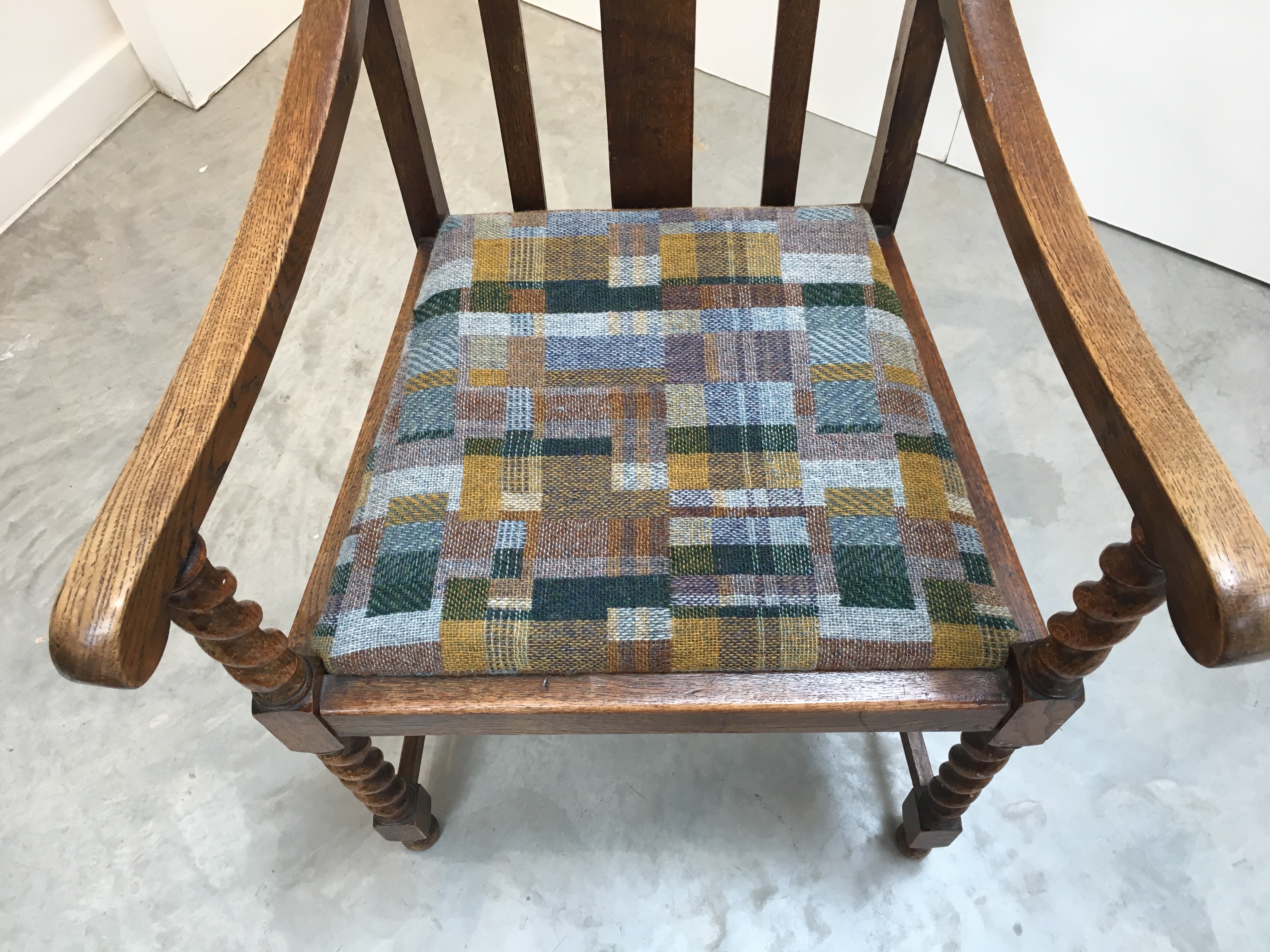 I am not ashamed to say that seeing that pad in that chair was rather overwhelming, and I very nearly had a little cry. I love it that much. The photo doesn’t really do it justice; the yellow ochre actually really resonates with the oak and makes the whole thing glow.
So there it is; the West Windows collection. If I had my time again I would include more finishing touches like piping on the big square cushion, and thinking about it now (has only just occurred, which is a shame as I could have mentioned it when I presented it in my assessment) I would have retreaded some parts of the warp for the lampshades, to break up the big blocks of colour vertically. I also would have perhaps included some more pinkish tones from the artwork, but overall I’m very pleased with the collection and it’s different from what people often think about when they think of the very regular patterns of double cloth.