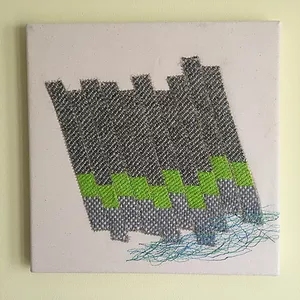 It’s been a busy few weeks since my last post. Common Threads had their One Year On mini exhibition as part of Bradford School of Art’s Summer Show, I’ve been down to London to scope out New Designers, we attended Sue G’s memorial and I made art pieces out of some of my weaving for Northwich Art Show’s Grand Day Out. I will write more on some of these later (time has been squashed as I’ve been teaching a couple of days a week recently) but I thought today I’d take the chance to share some of the art pieces.
They came about initially as part of the Icelandic project for One Year On. We had been given some Icelandic yarn, spun from one of our fellow student’s flock, so we used Iceland as our starting point, with the aim of using some of the Icelandic yarn in each piece we made. My art pieces use two different techniques and were inspired by two photographs of cliff formations in Iceland.
Firstly, two pieces inspired by some colourful strata. I dyed the coloured yarn myself, using the naturally coloured Icelandic as the base. You can see the natural coloured Icelandic in the widest stripe.
Klettar I is woven in one piece, with the strata being formed as a tapestry insert against a twill ground cloth woven in a natural 2/8.25 British wool from Shepley’s in Yorkshire. It’s mounted in a box frame, so isn’t easy to capture well in a photo. 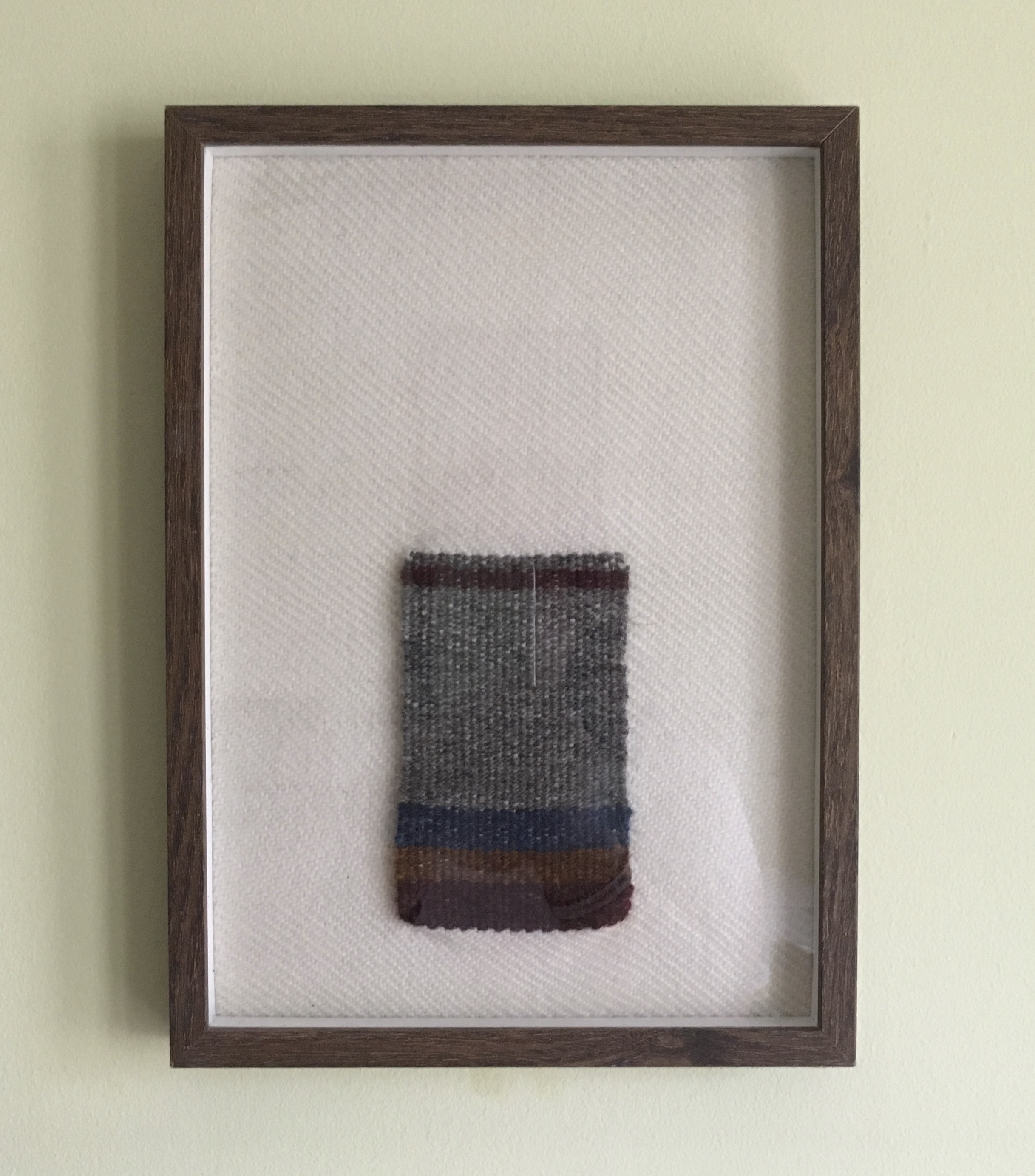 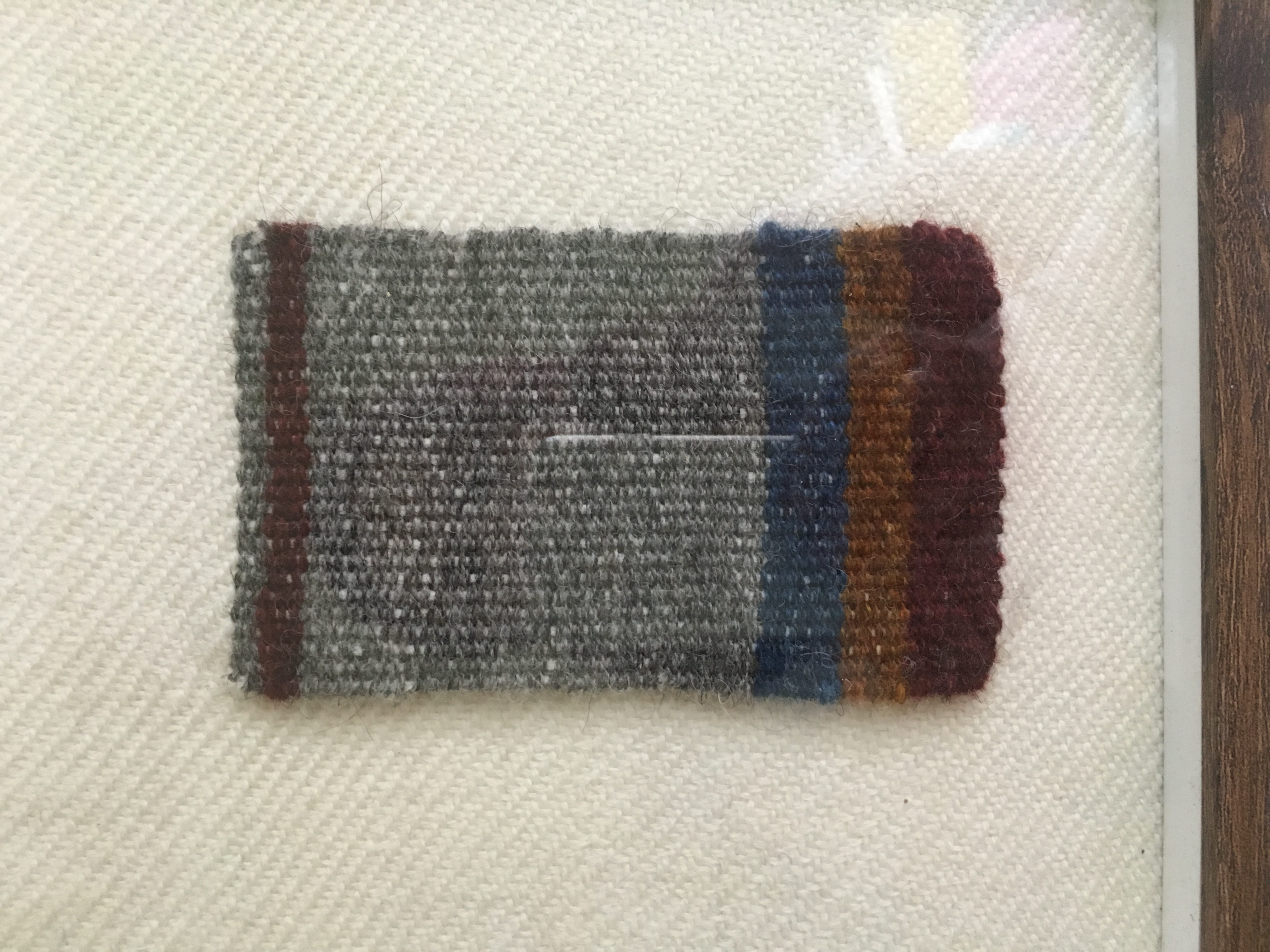 The second piece is Klettar II. Here I wove the strata the full width of the Shepley’s warp, then sliced it on an angle, appliquéd it on calico and added some free machine embroidery to anchor it. The calico is stretched over a 50x40cm canvas for mounting. 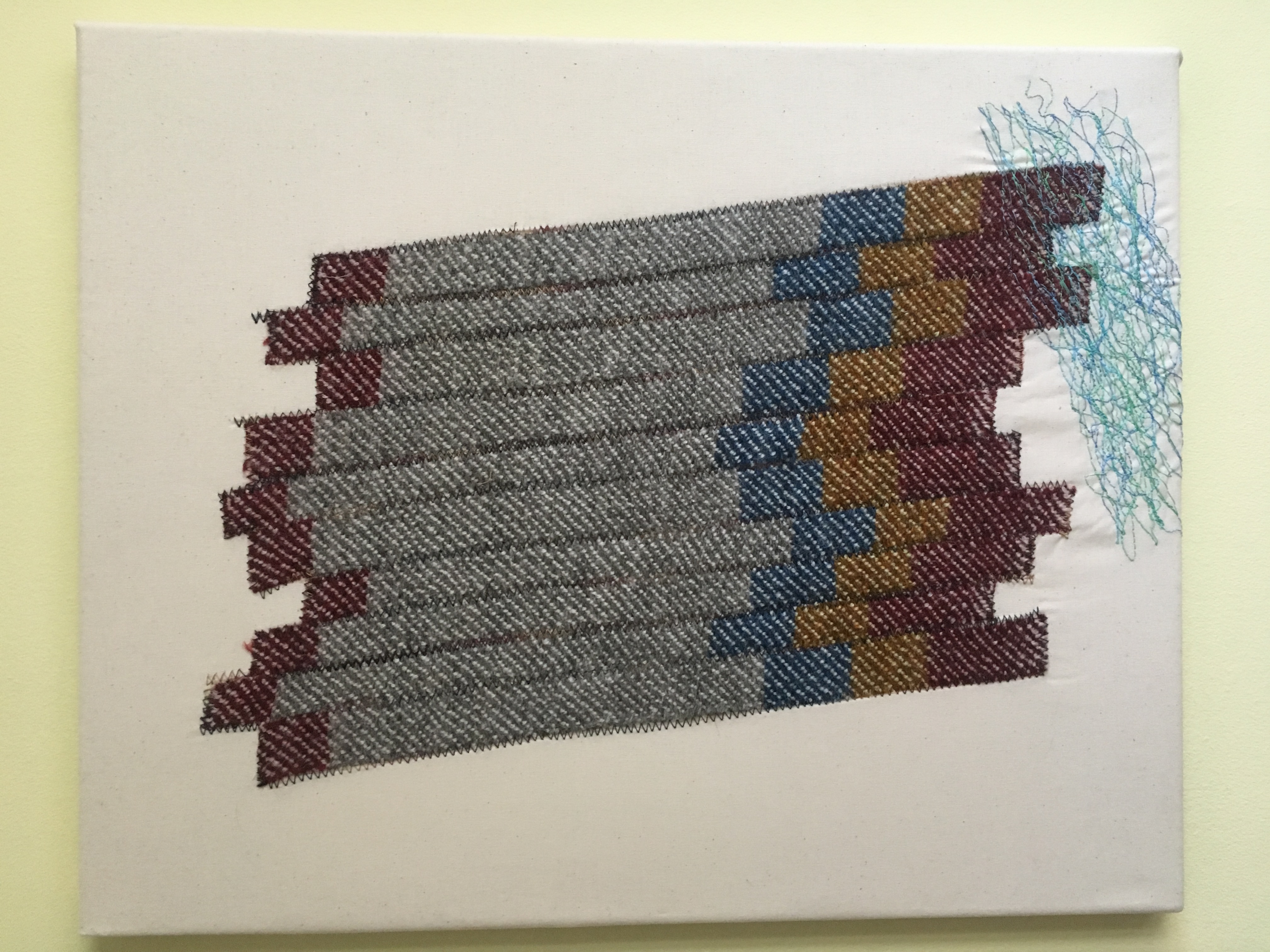 The second pair, using the same techniques were inspired by a picture of cliffs at Arnarstapi in Iceland. Here the strata are formed from the natural Icelandic and then some of the 2/8.25 yarn I had dyed. I also played with a different weave structure in places to capture the nature of the rock formation.
Arnarstapi I is also appliquéd and embellished with freehand machine embroidery, and this time stretched over a 30x30cm canvas. 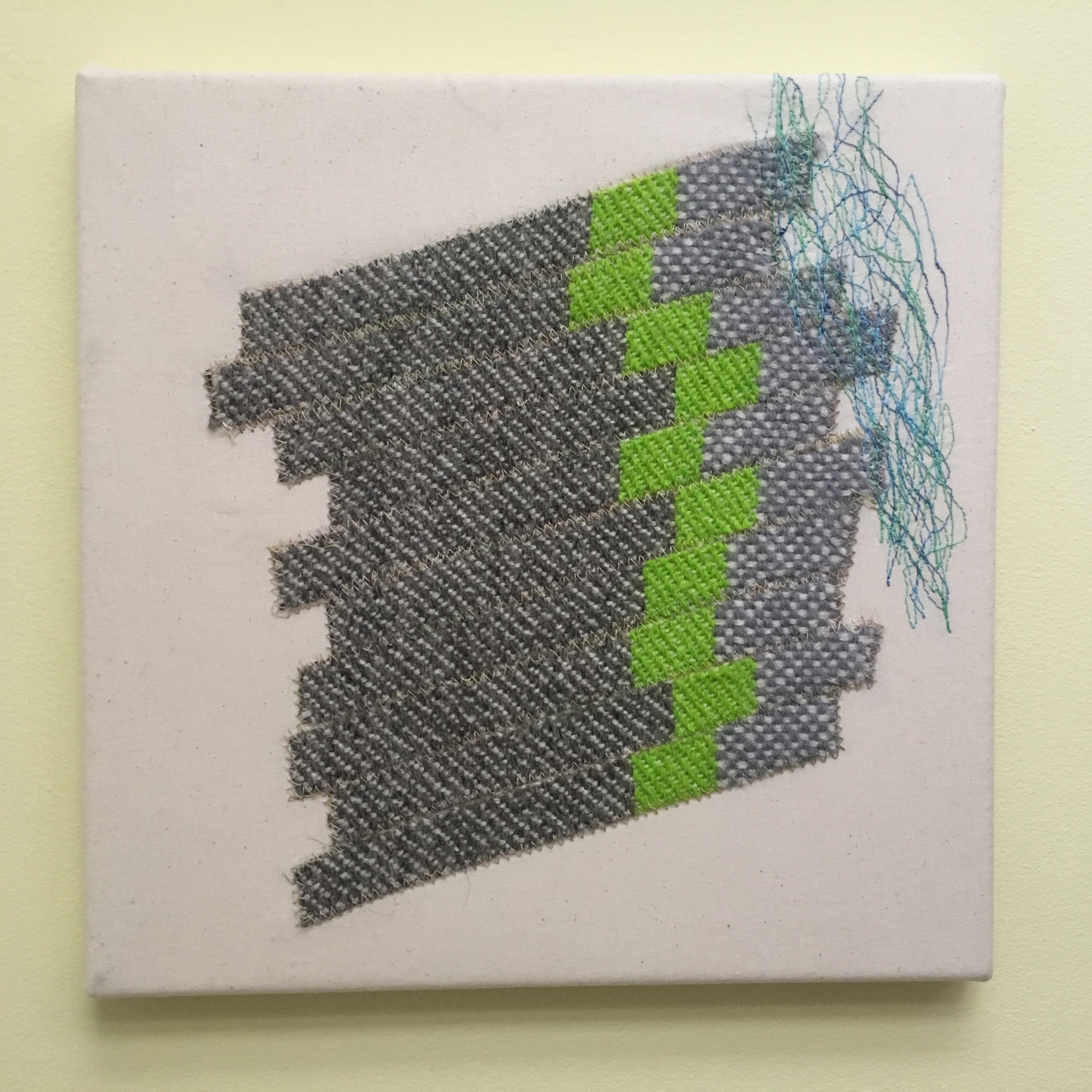 Arnarstapi II is a tapestry insert again, this time mounted in a square box frame. I am seriously considering taking the Perspex out of the front though, as it obscuring the details. 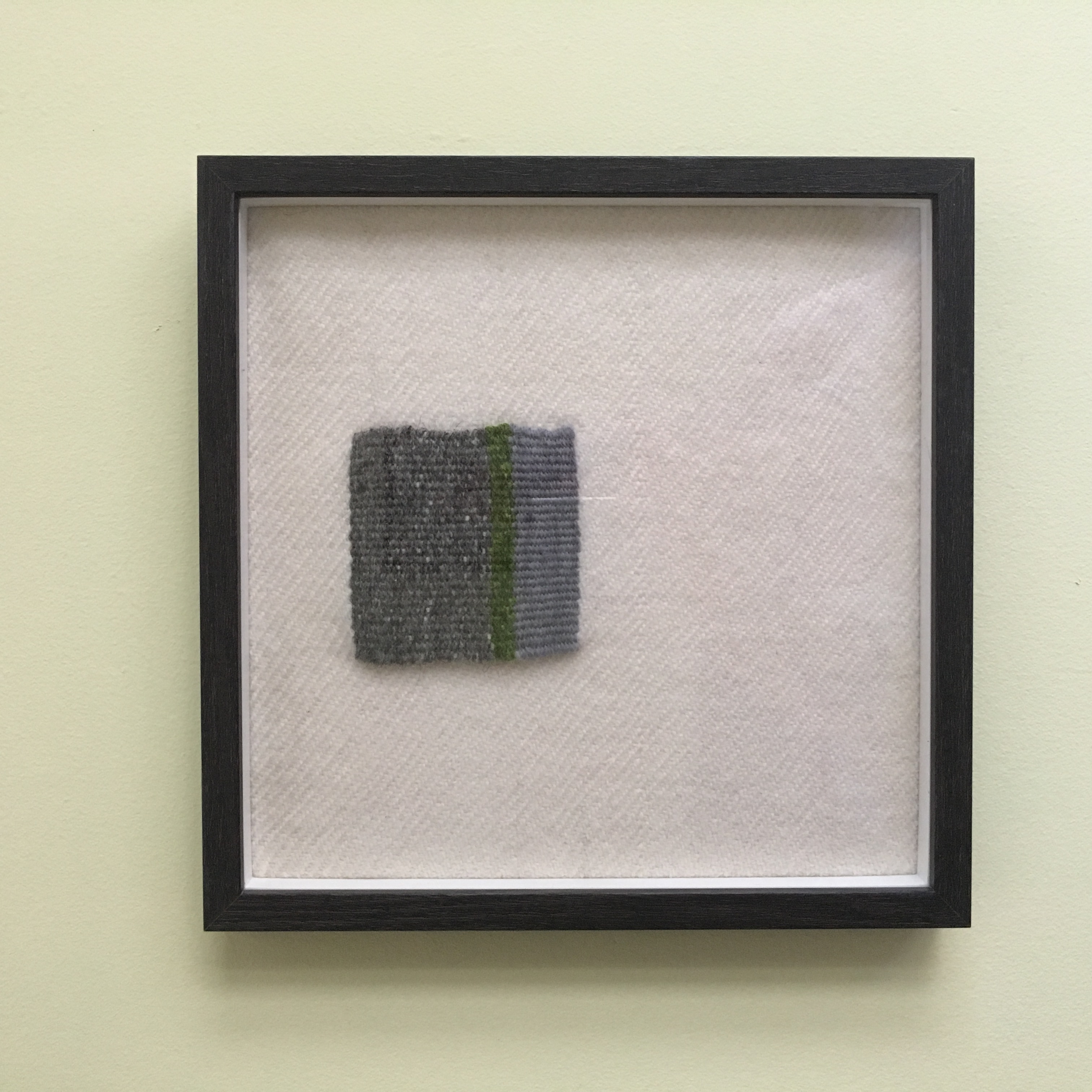 These were part of what I took to the Northwich Art Shop Grand Day Out, which I was viewing as a chance to network more than make sales, although I was thrilled to make some sales! I’m still wrestling with trying to set a shop up on the website. When I do, I’ll pop these up there.
It was lovely to sit and share my weaving with people last Saturday and lots stopped to chat and watch as I was weaving on the 8 shaft sampling loom, and it’s been really interesting to take my weaving in new directions.