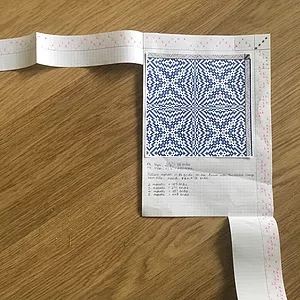 Good question! I’ve spent the last couple of weeks really pushing forward with getting Yarns From The Plain back up and running whilst simultaneously working on the development of workshops. I was delighted to work with my first one-to-one student this week; we covered a huge amount of ground in one day, but I was able to do so because I knew her previous experience with rigid heddle weaving and could build on that. However, preparing materials for that whilst working on the dyeing side has meant that no actual weaving has happened in this house for two months! However, what I have done is snatch bits of time for planning and designing. It might not be much to look at, but the following pictures do indicate there has at least been thinking about weaving going on!
First up is this old school planning shot. 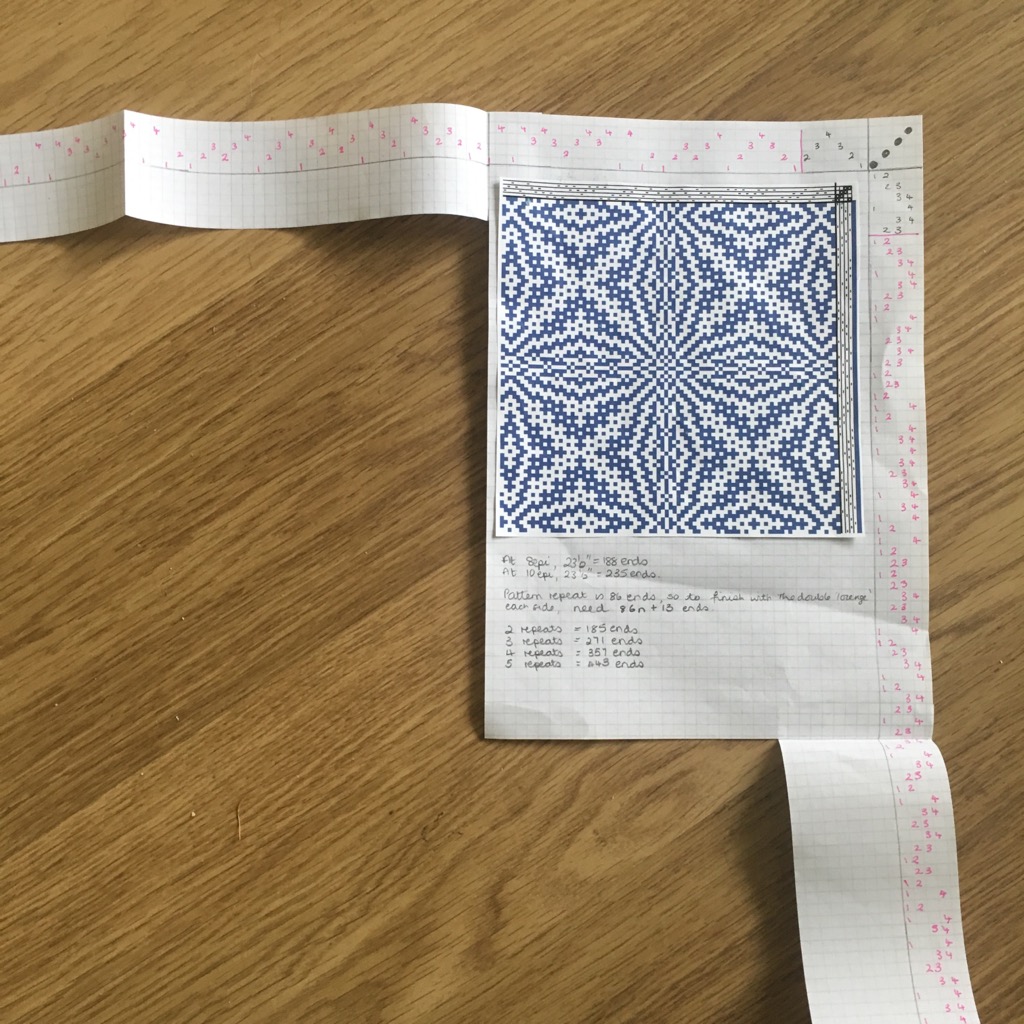 Remember I mentioned how Common Threads was going to be exhibiting a One Year On stand at the Bradford School of Art Summer Show in June? Well, we’ve decided that our common thread for the exhibition will be a yarn that has been spun from a member’s flock of Icelandic sheep that graze on the Derbyshire Peak District. Many of the others have been inspired by photographs of erupting volcanos, geysers and snow and ice fields. Me? I’ve been inspired by a woven alpaca wrap I saw at a wool show last year. It showcased the natural cream yarn in a snowflake twill and was beautiful. Single colour yarn in both warp and weft really isn’t something I’ve done much of (the silk weaving in the summer shows there is nowhere to hide!) so I thought I would explore the idea of self-coloured snowflake twills.,although this Icelandic yarn is a grey/brown
colour, not white. A quick web search turned up this articleon snowflake twills and I’ve taken one of the suggested twills and tweaked it a little. I’m planning on weaving it on my old 4-shaft loom, which doesn’t have treadles, hence the lifting plan written out in full…
I’m also thinking of dyeing some of the yarn in shades of red, to link with the idea of Iceland being the land of fire and ice, to make a series of wraps. Of course, before I can do that, I need to get the current warp on that loom finished…
That’s all very wintery, but I have a place in the Shropshire Guild of Contemporary Craft’s Showing Off in April and I don’t think heavy winter wraps in a snowflake twill will really cut it! I want to develop a summer range of scarves in bamboo and tencel, and it will be inspired by the brickwork on the high street of the town I grew up in. However, even though I have the yarns for the first palette, my visual research and design has really not got much further than a photo collage. time to get a wiggle on and clear the Dobby loom too…: