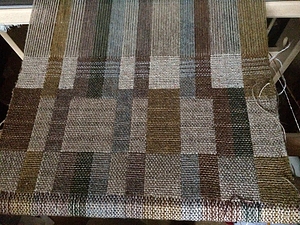 When the Magic Dobby arrived nearly two weeks ago, I decided I wasn’t going to warp it up until after my tutorial on the 1st of April, but I just couldn’t wait that long! It took me a while to put the loom together, but only because I was doing other things at the same time, like shoot down to London, tidy the house whilst my husband was away, enjoy sitting in the sun dog spotting with a friend…
Anyway, I decided to time the whole process of warping up the loom. I’ve warped for double weave, 204 ends on each layer, and the warp itself is just over 4m long. It went fairly straightforwardly, although I needed to take frequent breaks due to an unrelated shoulder problem. It took around twelve and a half hours in total from start to finish, which included the wailing when I realised I’d had a brain fart and taken the cross sticks out before I threaded the ends through the heddles (this is A Bad Thing), more wailing and gnashing of teeth when I realised that I had threaded a quarter of it incorrectly so had to swap pairs of threads over, then more gnashing when I realised I’d not pushed heddles over on the 12th shaft and that I somehow had to get them to jump over 300 threads that I had already threaded through the heddles (half of them twice) and other minor irritations. With luck, not repeating such stupidity will speed the process up somewhat next time. I love the inbuilt raddle that spaces the threads out correctly though. And the Dobby mechanism? Works like a charm!
So what have I actually done so far? I’ve been sampling to work out colour combinations, patterning and also to investigate finishing techniques. Here are a few shots to keep you going for now – I’ll share more in a couple of weeks. 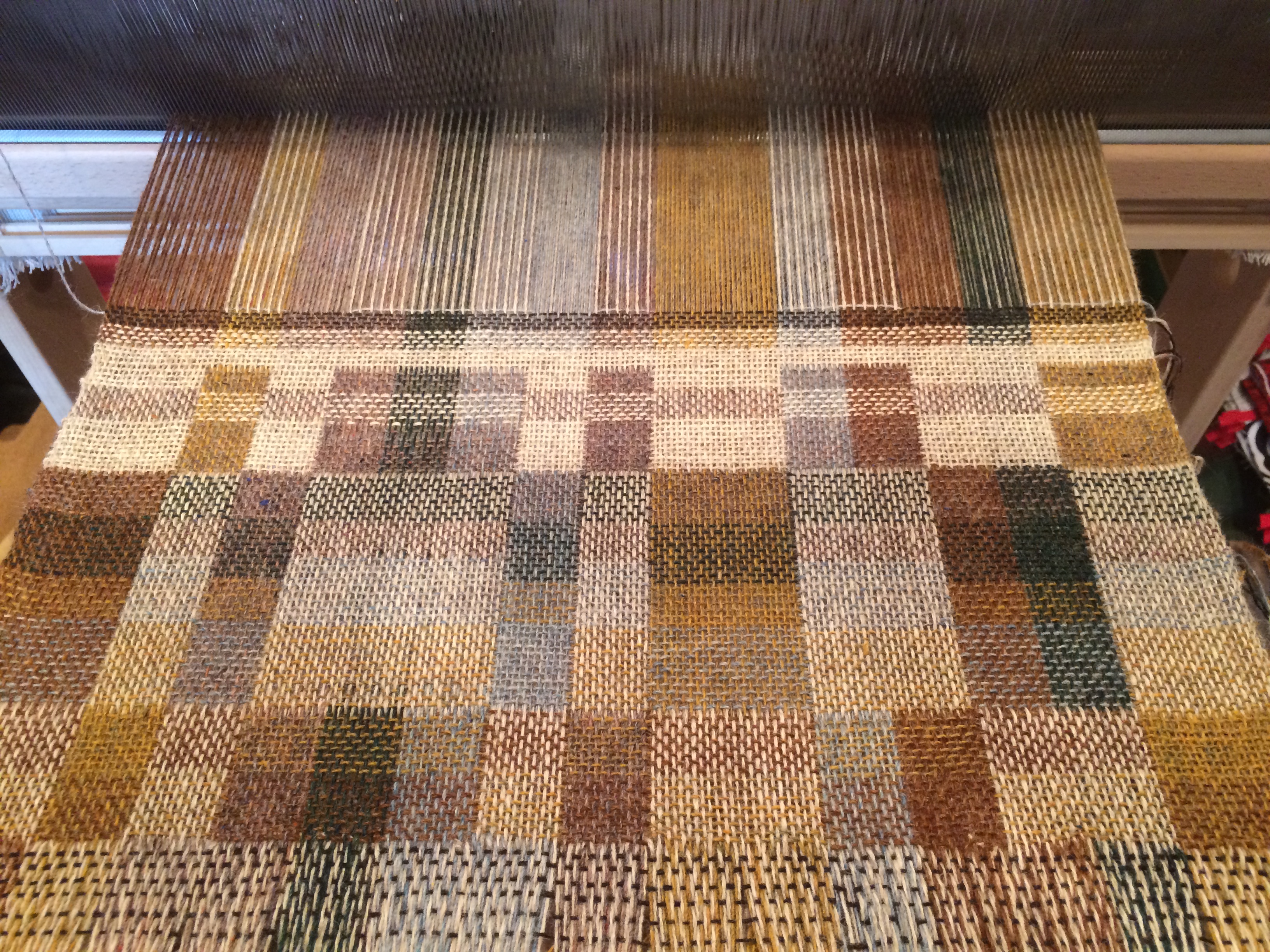 This is the first piece of weaving I completed on the Dobby – historic! I was working through the lifting patterns I’d written to check they worked correctly. 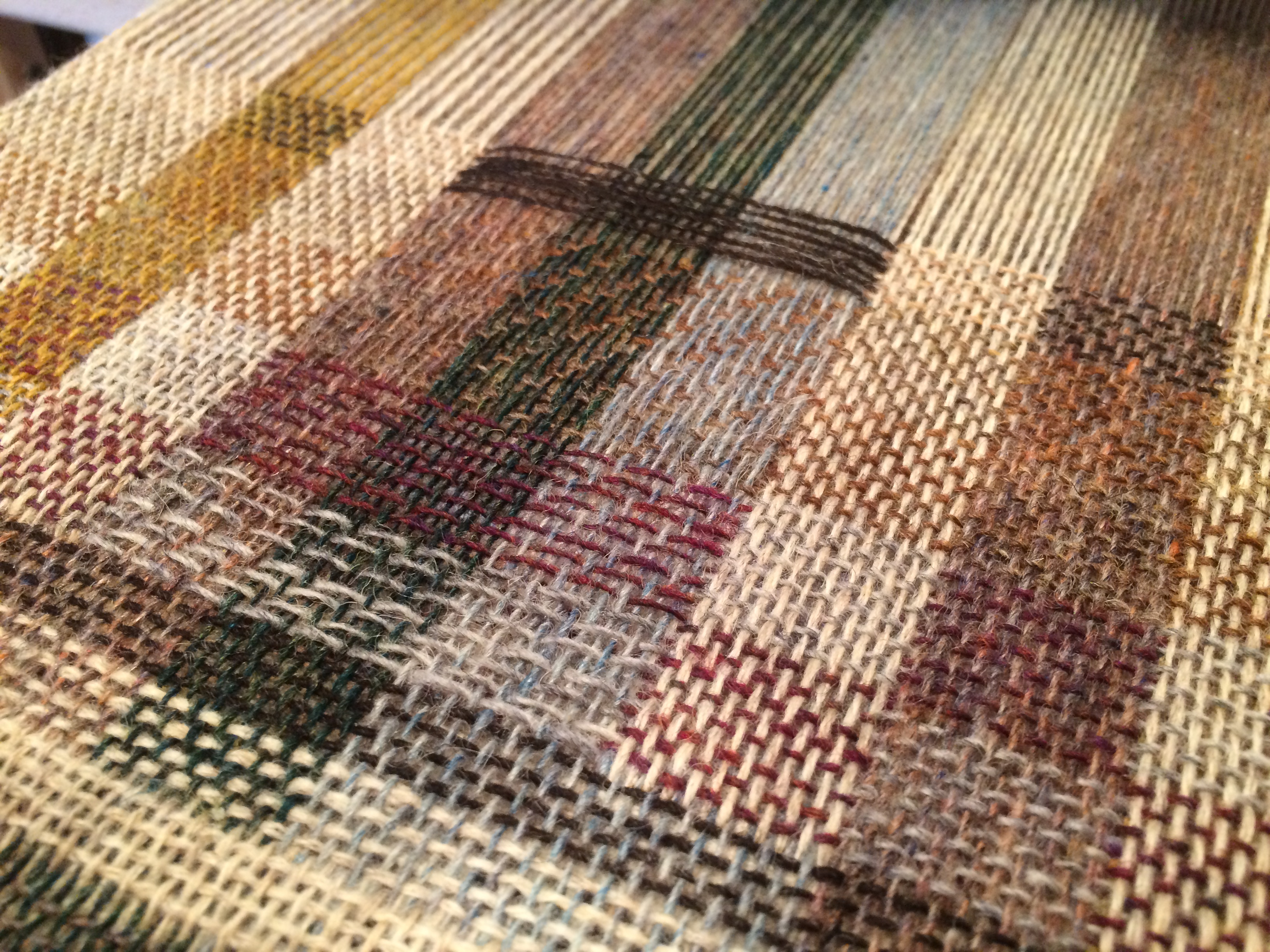 in this piece you can see the block that I have threaded partly on shafts 9 to 12 to allow me to create one block of twill or isolated floats. 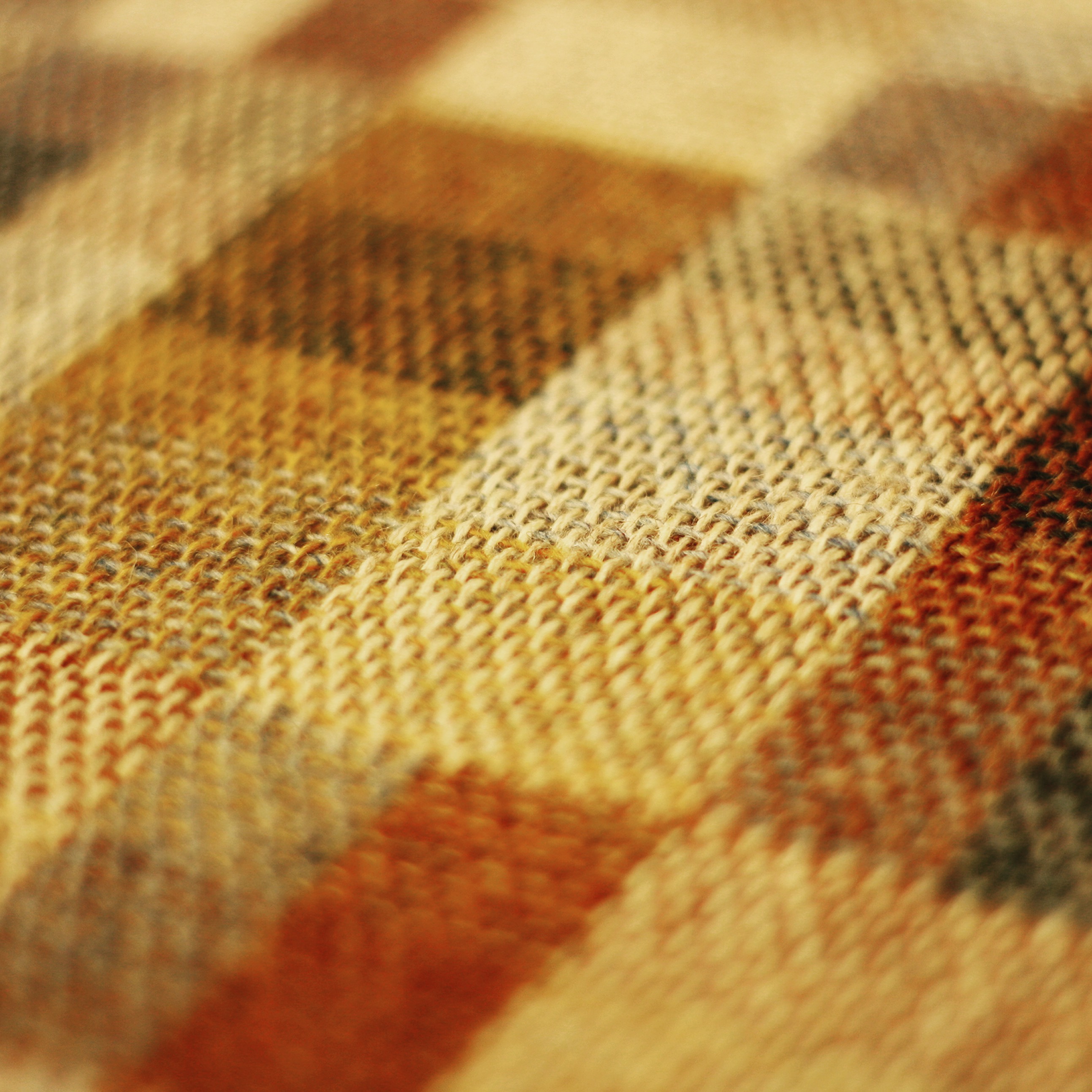 This is an arty shot, taken purely for Instagram! I love playing with my 50mm lens, but there wasn’t quite enough natural light, so the spotlights have tweaked the colours slightly. 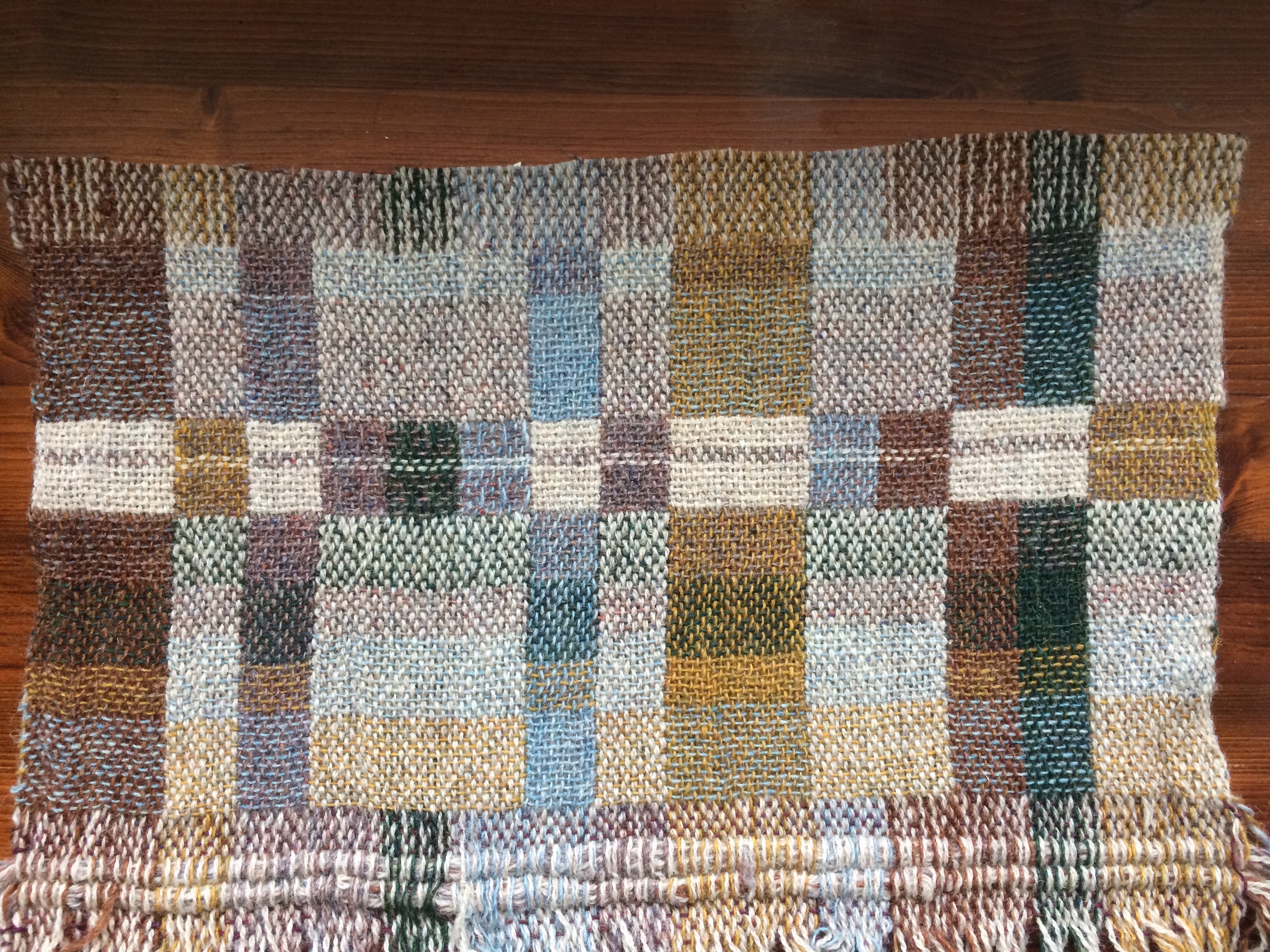 This is my favourite finish so far – handwashed and then line dried and steam pressed. It looks like a nice upholstery fabric, so I’ll be using this finishing technique on some of my fabric. 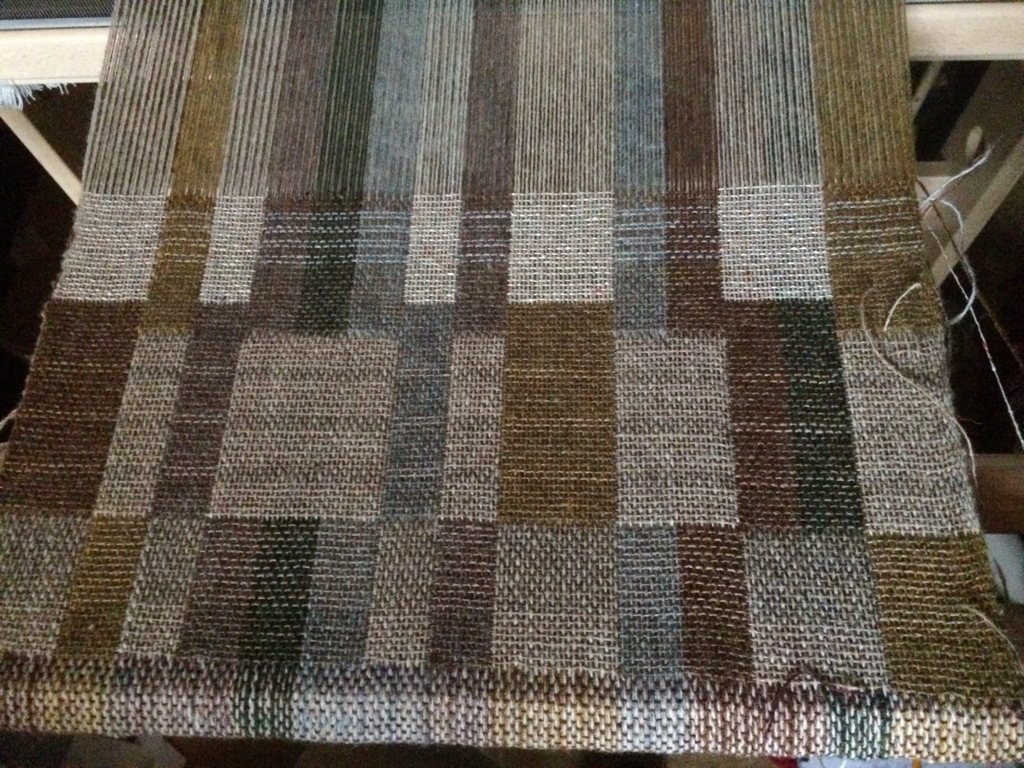 This is today’s work (not much because I was in and out trying to sort my gimpy shoulder out). I’m focussing on a part of the window that had neutrals in it and I decided to include a non-Shetland yarn here – the bright section st the top is a silk single with coloured nepps, that just give a little spatter of colour which you don’t notice unless you look close up. Tomorrow, I’ll be exploring a more colourful set of warp yarns to create a different effect.