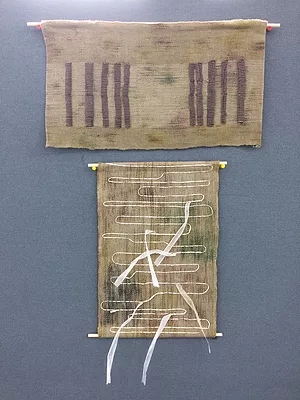 So, three months after it should have been, Project 5 has been submitted. It feels like a long and tortuous path, with a lot of flat sandy brown warp, pain when trying to weave, and general frustration at not being to execute what I had in mind.
One part of the collection is based on the wooden posts that form part of the Shot At Dawn memorial itself: 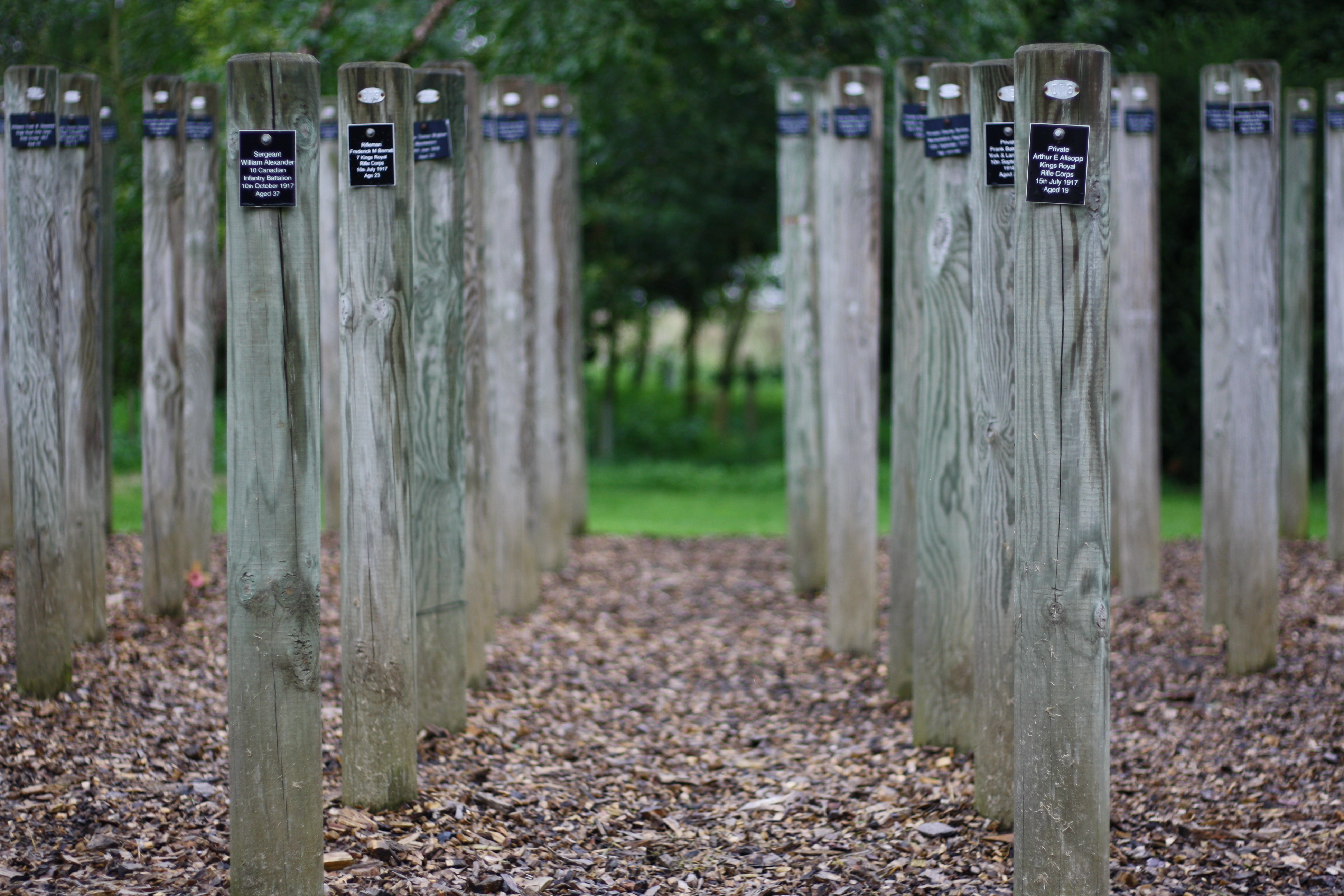 I like the strong visuals in these (although putting them straight after the photo highlights that I should have included some of that grass green!). 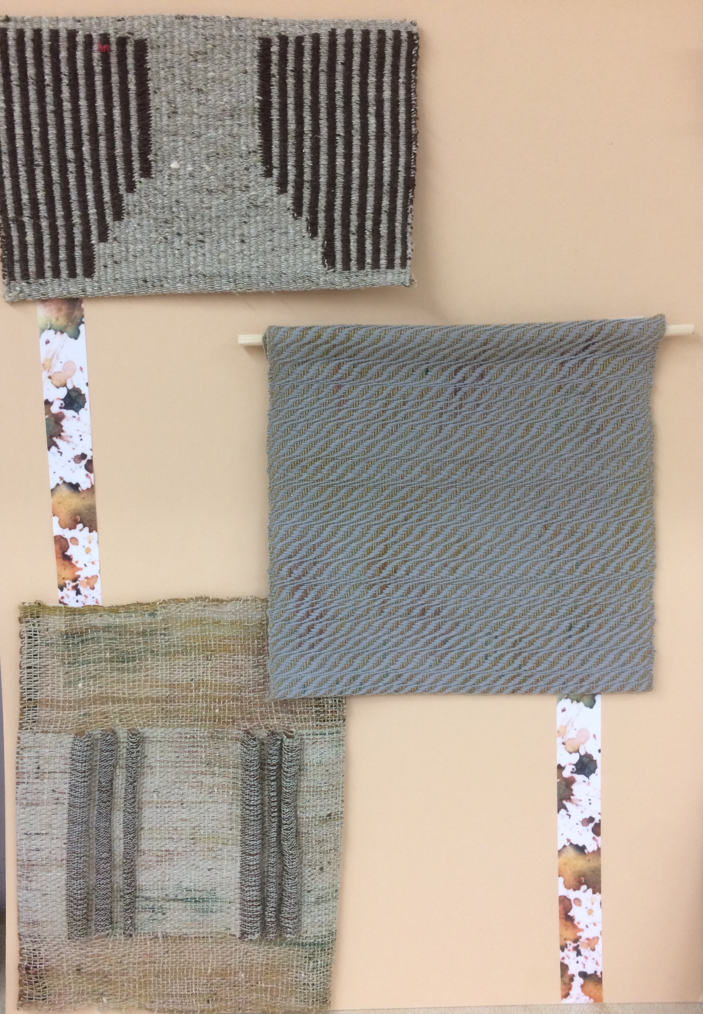 The grey undulating twill is based on the wood grain patterns in this picture. 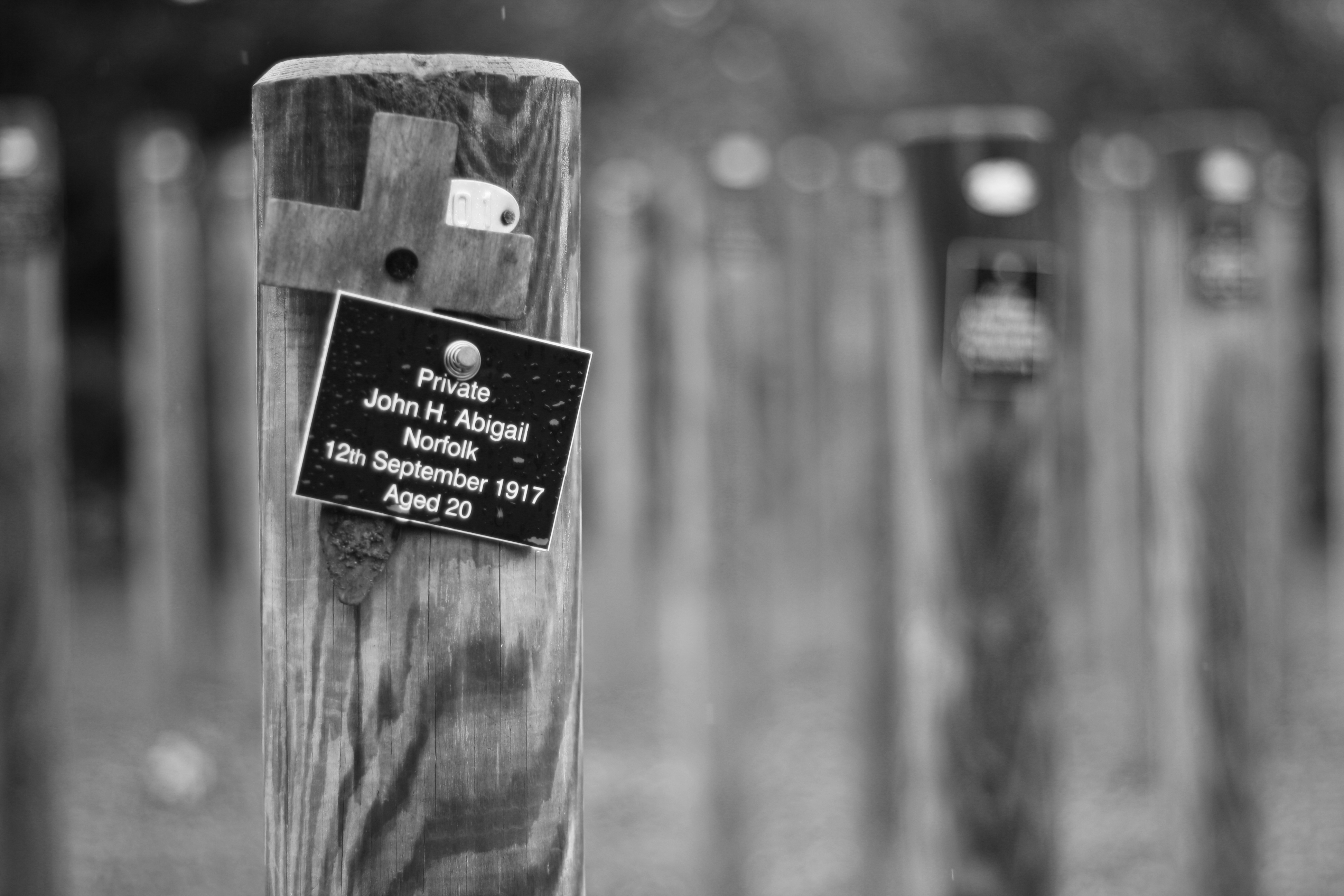 Throughout the project I had in my mind the idea of using the top layer of the double cloth to obscure parts of the bottom layer. I wanted to capture the stated reasons for the courts martial on the front layer, such as cowardice, quitting post and desertion, and then have that layer obscuring what we know now are some of the possible reasons behind them, such as PTSD, getting lost and breakdown. I captured the idea in this piece of visual research. 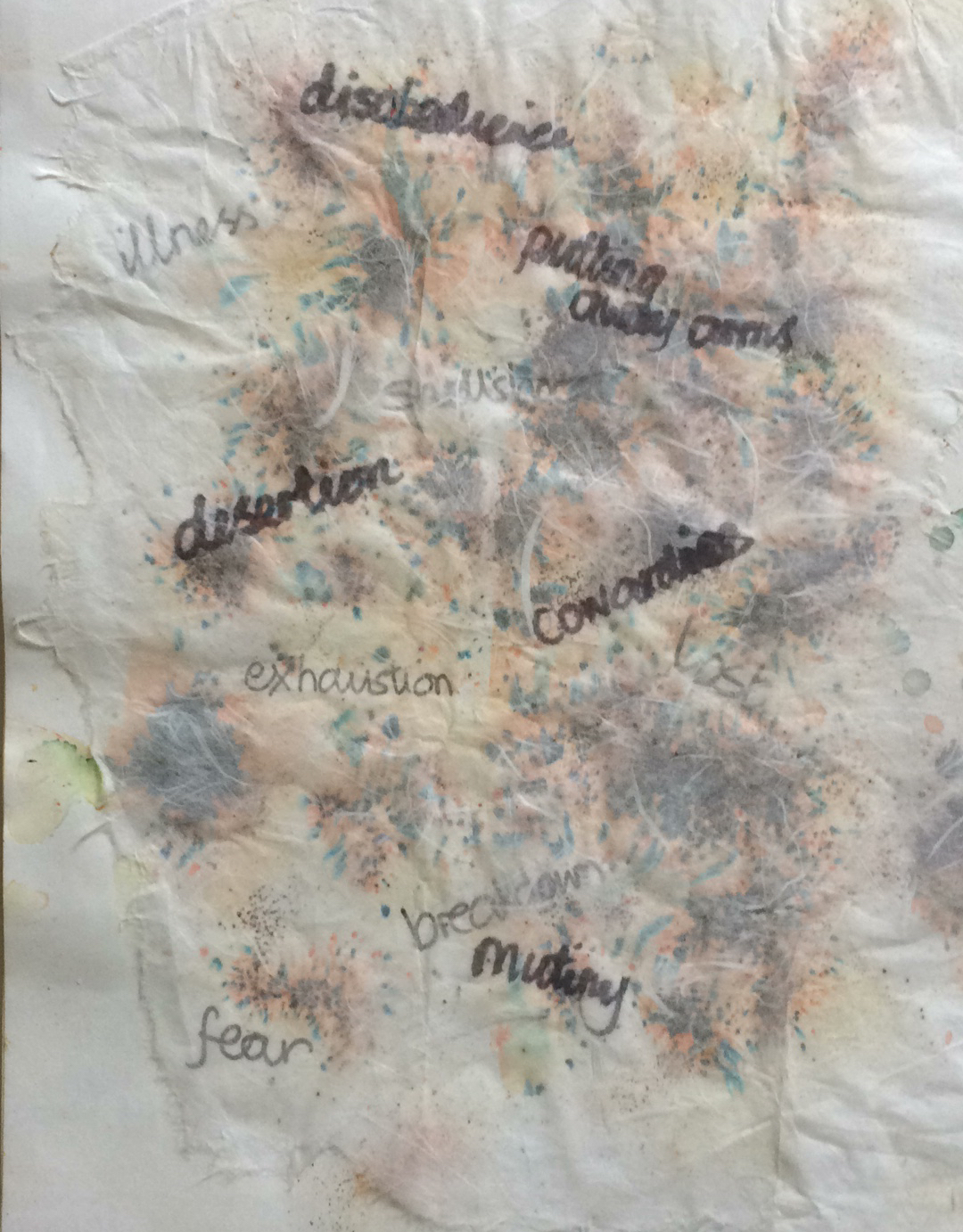 However I tried, I just couldn’t capture the idea the way I wanted. A friend kindly printed some ribbon for me, but the horizontal lines the ribbon formed were too strong and horizontal for the effect I was after. The front layer did obscure it slightly but doesn’t do as much as I’d hope. Also the ivory ribbon was just too stark and shiny for a he overall mood of the pieces. 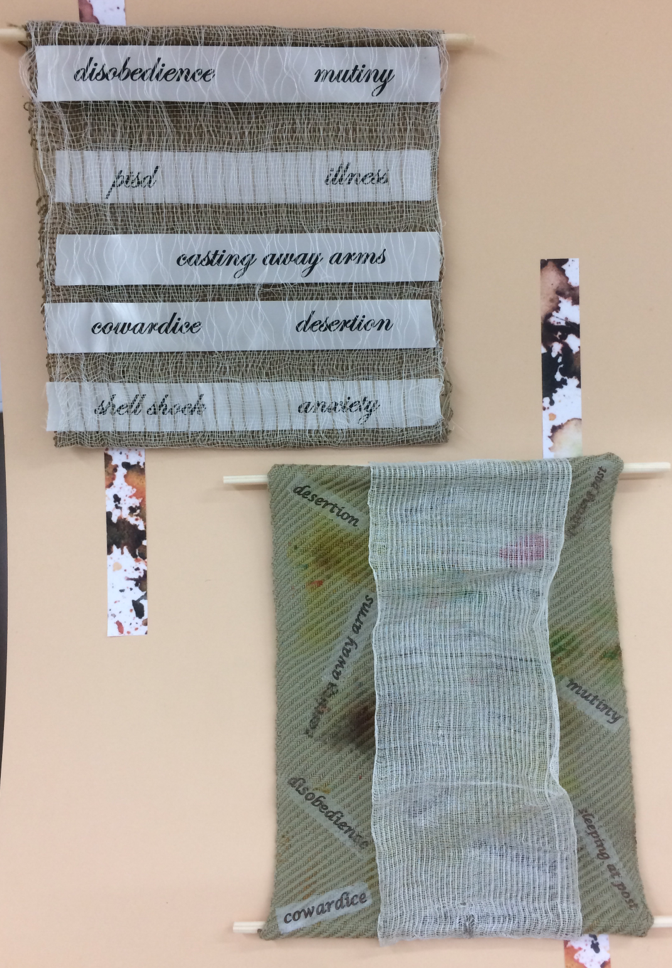 For the second piece in that board I rethreaded the top layer so it was half the width but double the density (32 ends per inch instead of 16). It does obscure more. The original intention for this piece was to stitch the text in, but it turned out on practising pieces that I needed to stabilise the stitching with soluble fabric and I just didn’t like the residue it left when you tried to wash it off. I printed the text onto iron-on transfer paper instead but I wish I had cut it closer to the text to reduce the amount of transfer that was visible around it.
For the final product I chose two pieces to hang as a diptych of sorts. One is the fluttering names piece I featured on a post in September and one is a reworking of the 3D piece on the first board. I deliberately chose to make the spacing and the size of the 3D elements irregular but looking at it I’m just not sure I pulled it off. It definitely isn’t as finished as well as some of the other pieces, which is something I need to work on in Project 6. 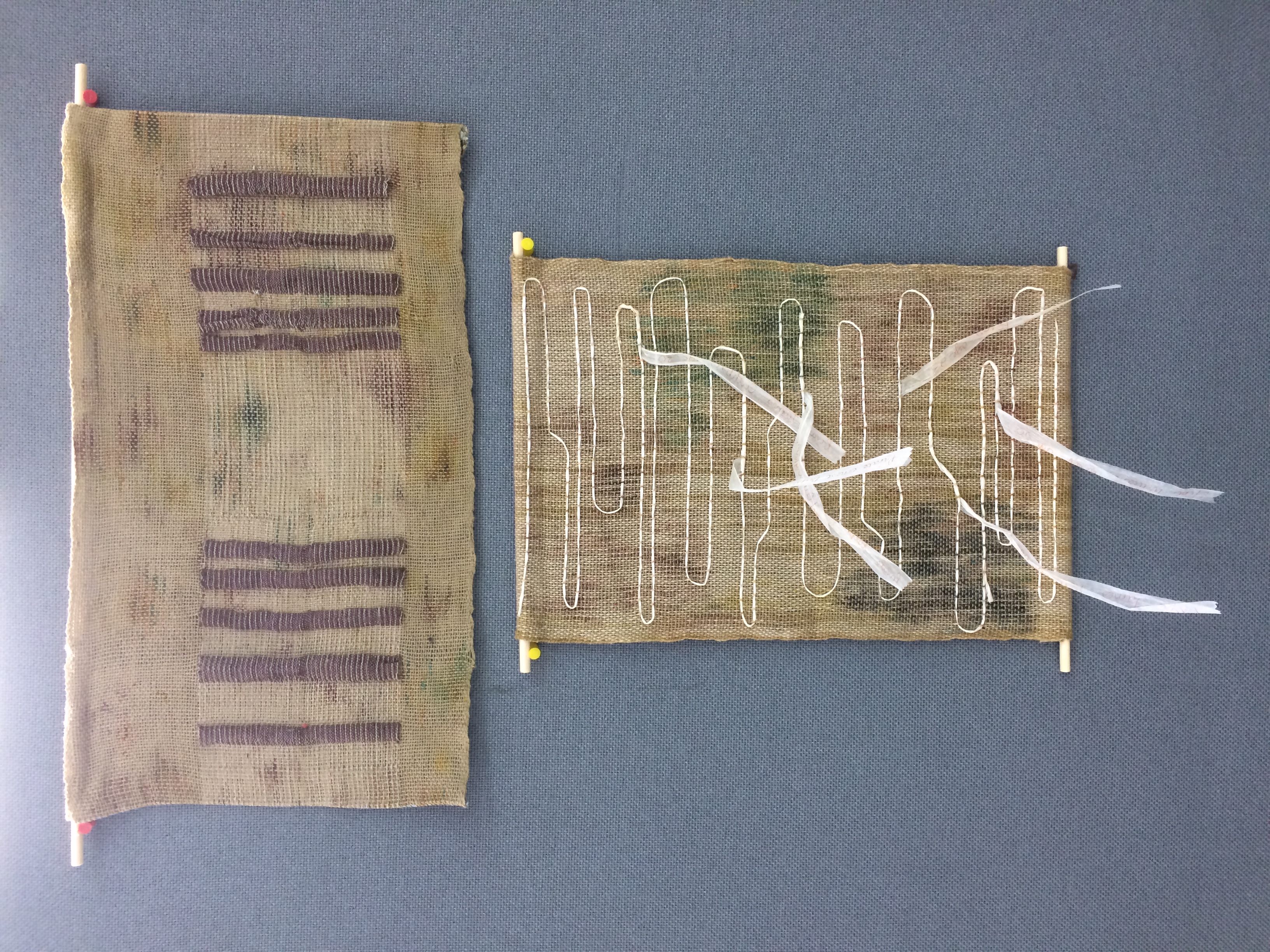 So nothing like the two foot wide, four foot tall piece that I envisaged. If I’m honest, that piece is still buried in me somewhere, but not before Project 6 is finished!
I felt an overall sense of frustration on this project and felt that I would be lucky to pass all five strands of it. To say I was gobsmacked when I got my assessment back would be an understatement. It is my highest marked project so far, so the agony of the creation was obviously worth it. But please- bring on the colour!!!!